Imo State has produced a large number of great actresses who have advanced the entertainment industry. These movie stars are gifted with special talents and originality, and they are adept at portraying any role that top film directors and producers assign them.

In this article, I’ll introduce you to five beautiful Imo state actresses in the film industry. Ruby Orjiakor is a Nollywood actress, producer, dancer, television personality, and model. She is originally from Amaraku village in Isi-Ala Mbano Local Government Area of Imo State in the southeastern part of Nigeria. Ruby Ojiakor has starred in Nollywood movies which include Sweet Romance Disrupted, Azila, War Soldiers, Shredded Emotions, Shake it Off. Genevieve Nnaji, born 3 May 1979, is a Nigerian actress, producer, and director. Nnaji was born in Mbaise, Imo State, Nigeria, and grew up in Lagos. She attended Methodist Girls College (Yaba, Lagos), before transferring to the University of Lagos, where she graduated with a bachelor’s degree in creative arts, she has starred in many Nollywood movies which include lionheart, Blood sisters, and Ije. Popular Nollywood actress Lucky Donald comes from Emii, which is part of the Owerri North Local Government Area. On May 28, 1991, she was born. One of Nollywood’s most brilliant actresses, the movie diva has received numerous accolades for her work in the industry. The well-known actress has featured in several Nollywood movies, including Songs and Sorrows, Lust in Marriage, Royal Siblings, Seed of Sorrow, and Marriage Bride Price.

ALSO READ: 4 Proud Celebrity Fathers In Nigeria And Why (Photos) Blessing Chioma Nwaoha is one of the talented actresses who is currently been featured in Nollywood movies. She was born on the 2nd November 1995 in Imo state. She studied at the University of Port Harcourt where she graduated with a bachelor’s degree. Chioma Nwaoha has starred in many Nollywood movies which include Bishop Girls, Strong Feelings, Woman On Fire, King of Men, and Bad blood.

Talented actress Princess Chidinma, also known as Princess Salt, has impressed her fans with her distinctive dancing abilities. Among the many films in which Chidinma has starred are Irony of Life, Her Friend, and Marlian Prince. Chidimma is also a model, brand influencer, and fitness instructor. 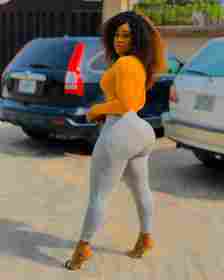 Which of these actresses has impressed you the most in terms of acting In movies?