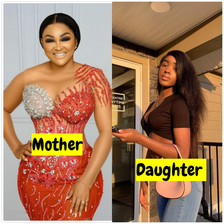 Mercy Aigbe is a well-known Nigerian actress who has appeared in both English and Yoruba films. She has inspired many of her admirers with her fashion style and has received the best-dressed actress award numerous times, in addition to appearing in films. Mercy has a lovely daughter who is following in her footsteps into the fashion world. Michelle Aigbe is the actress’s daughter, and she is also the actress’s first child.

She was born on July 11, 2001, in Lagos State, where she received her elementary and secondary education before moving to the United Kingdom to pursue her higher education. Michelle is a student at the University of Manitoba, where she is majoring in Aeronautics Engineering.

READ ALSO: 7 Kids of Nigerian Celebs Who Are Carbon Copy Of Their Father & Mother Looks (Photos) Michelle began modeling at an early age and now has her own fashion and beauty line (name withheld). She is recognized for enthralling her admirers with a plethora of photographs she posts on her social media accounts showcasing various outfits. With over 1 million Instagram followers, she is currently one of Nigeria’s most popular young models. 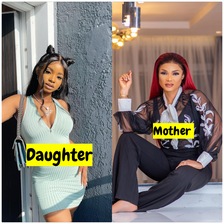 Priscilla Ojo is the only daughter of Iyabo Ojo, a prominent Nollywood actress. She was born on March 13, 2001, in Lagos, Nigeria, and received her elementary and secondary schooling there. She is currently enrolled at Babcock University, where she is majoring in Media and Theater Arts. Priscilla, who was encouraged and nurtured by her mother, has dabbled in a variety of fields in the entertainment industry, having appeared in Nollywood films and comedy sketches. Despite her status as an entertainer, she is a well-known fashion and beauty model who has worked for a number of fashion and beauty brands and has influenced a variety of fashion designs and looks.

With the lovely dresses she flaunts on her social media handles, Priscilla has started her apparel line and has inspired many young females.

What are your thoughts on these stunning models?